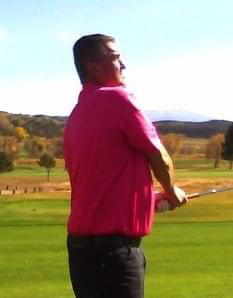 “Not sure how we got so lucky to find you?! But I’m sure glad we did! I can’t believe he’s been with you for 5 years now. Time flies when you’re having fun! Thank you for everything you do for Carter!! Your support and encouragement means a lot!” – A.F.W

K.W. says – “Glad to see you are still taking so much time to work with the youth. I would of killed to have access to that technology when I was younger!
Tad Replies – “It is amazing what I can do with these young kids. They get better so much faster with this technology.”

“This kid is GOOD! And has a good teacher……. Powerful combination! – S.M.

Tad was born in 1965 in Ontario, Oregon. He graduated from Ontario High School in 1983. After High School he attended Boise State University where he played golf and was All Big Sky in 1985 & 1986. In 1987 he joined the PGA as an apprentice.

1988 – Rocky Mountain Assistant Champion
1990 – Played on Sunshine Tour in South Africa best finish was 3rd in Durban Open.
1991 – Runner up in GI Joys Portland Invitational 300 competitors
1991 – Made it to Finals of PGA Tour School finishing 57 out of 219 which gave him a Nike Tour Card, which is now the Korn Ferry Tour

Jeff was born and raised in Bonnyville, Alberta, Canada, graduating from Notre Dame High School in 1992. Excelling at both golf and hockey, he followed one of his dreams, to play professional hockey.

His career was cut short, due to injury.Fortunately, Jeff was able to pursue his other favorite sport, golf. He played for Lewis and Clark State College, and in 2001 he graduated from the San Diego Golf Academy.

His skills were applied while he was a golf instructor at the San Marcos Resort in Chandler, Arizona.

Although he is a life-long athlete, Jeff’s true calling is that of a teacher. He has spent the last 7 years teaching Boise’s youth in the Learn to Play hockey program, as well as children with special needs in the Adaptive Skating program. His goal is to help his students capitalize on their strengths and improve their skills to enjoy their sport more fully.

As the Assistant Pro golf instructor at TimberStone Golf Course, Jeff looks forward to helping students of all levels progress in their golf game while having fun.